Computer Problems / Our Lady and The Aeneid

The computer I use to write these posts is broken. My retelling of the end of the Second Aeneid is written and ready to go but I can't access it. I've no idea at the moment when it will be fixed. Could be days, could be weeks. I just don't know. I'll post the story as soon as I'm able.

Just while I'm here I'd like to point out briefly that there are numerous proto-Christian elements in Virgil's account of the fall of Troy and also in The Aeneid as a whole. The Medievals knew this well. I've tried to draw these out a wee bit in my version. There's no doubt in my mind, for instance, that just as it's Aeneas's divine mother, Venus, who leads him out of the ruined city and imbues him with a higher destiny, so it will be our blessed Mother - Our Lady, The Theotokos - who will save us from the burning marl of our collective auto-da-fe and point us towards the future - a future who is also a person, of course - Christ the Lord.

Posted by John Fitzgerald at 11:09 AM No comments:

A Note on The Aeneid and Two Upcoming Posts 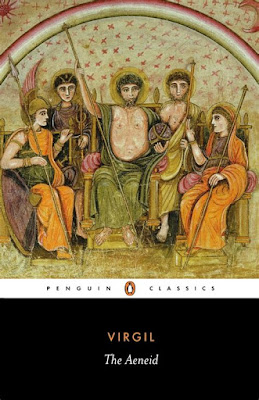 I've been reflecting a lot about The Aeneid this past year, especially in relation to the great spiritual and cultural darkening currently descending on the West. Three aspects in particular stand out - (1) The collapse of a civilisation - Troy for Aeneas, Christendom/Europe/America/The West for us, (2) The need to recognise what's of value in that civilisation, salvage it from the flames, and bring it with us into the future,  the old finding new expression in a new and Divinely-appointed dispensation (Rome in Aeneas's case), and (3) - a corollary of (2) - the need to have faith in the future and to trust in the promptings of the gods.

Those are the master themes of Virgil's poem for me, with reference, as I say, to the civilisational car crash playing out around us. So with this in mind, I intend to post two retellings from this foundational text over the next month. The first, due on Sunday 28th all being well, is my take on the end of Book Two - Aeneas's flight from Troy. The second, which will hopefully appear towards the end of March, is a retelling of Book Six - Aeneas's encounter with the Cumean Sybil and his trip to Hades and the Elysian Fields.
There may be one or two shorter posts in the interim but this is where my imaginative focus will be between now and Holy Week. These acts of piety to a writer I and many others consider a prophet of Christ will, I hope, in their own small way, serve as a statement of intent in this dark time - an act of ressourcement - a return to the source and wellspring of European tradition, the aboriginal calamity of the fall of Troy, which yet bore fruit, according to legend, not only in the foundation of Rome but of Britain too. But that's another story!
So a nice way, perhaps, to mark (I won't say celebrate!) the one year anniversary of Covidworld's dismal eruption into our lives.
Posted by John Fitzgerald at 1:33 PM 2 comments: 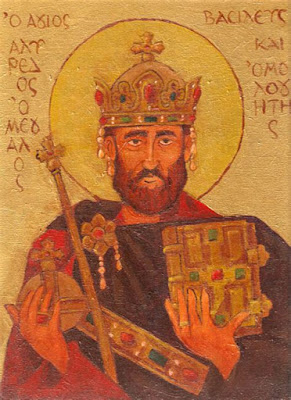 I like to listen to music on YouTube while doing the dishes in the evening. Last night a song popped up on my playlist which I hadn't 'cued up' or expected - 'Private Eyes' (Disco Purrfection Mix) by Hall and Oates. I was glad to hear it. It's been a while. It's a smashing tune. Have a listen here.
I last heard this song in May 2018 in The Circus Tavern on Portland Street in Manchester. I remember walking in one evening and hearing it on the jukebox. Then I noticed a man standing at the bar. He looked a bit like the older Yeats but reminded me instantly of Alfred the Great (above). He had the same air of Kingship, you see - natural, inherent, unforced - the type that people are drawn to and follow. In palaces or in marshes. It makes no difference.
We didn't make eye contact. I saw him; he didn't see me. But I knew straightaway, without a shadow of a doubt, that he would one day rule this island, as King or Emperor or possibly both. It's only a matter of time before I see his face again, first in the media, I expect, and then once more in person.
He's gathering his forces right now, I believe, regardless of this silly lockdown. On Salisbury Plain maybe, or at the back of a retail outlet on the outskirts of Leeds. It makes no difference.
The King is on his way again, make no mistake. All we have to do is know him when he comes. As the old song has it -
Yes, this I can tell
That all will be wellWhen the King enjoys his own again.
Posted by John Fitzgerald at 1:55 AM No comments: