No Mean City - Aeneas and the Fall of Troy 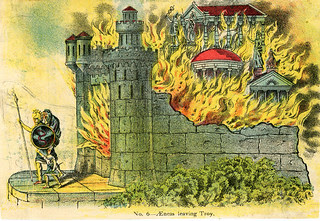 A dense stream of coloured rockets now began to mount from the haze among the battleships, emptying on the sky their brilliant clusters of stars and diamonds and smashed pearl snuff-boxes with a marvellous prodigality ... The very sea seemed to tremble. I had had no idea that we were so near, or that the city could be so beautiful in the mere saturnalia of a war. It had begun to swell up, to expand like some mystical rose of the darkness, and the bombardment kept it company, overflowing the mind. To our surprise we found ourselves shouting at each other. We were staring at the burning embers of Augustine's Carthage, I thought to myself, we were observing the fall of city man.