Walking Through Fire - The Byzantine Poems of Charles Williams and W.B. Yeats

And I John saw the holy city, new Jerusalem, coming down from God out of heaven, prepared as a bride adorned for her husband. 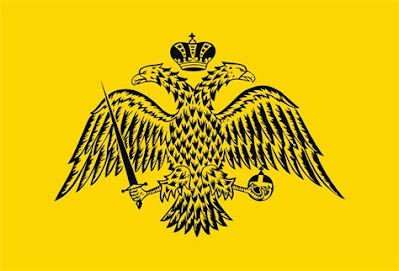 Posted by John Fitzgerald at 4:07 AM 2 comments:

The best essay I've read on 'That Hideous Strength' ...

... is this one by Mihai Marinescu on the Kali Tribune website - www.kalitribune.com. It was written in September 2017 but it's so relevant to the world of January 2021 that it could have been written this morning. I'm thinking here about what it says about the demonic intelligences ('Macrobes' as Lewis calls them) who dictate so much of the agenda in That Hideous Strength. I don't really need to emphasise the extent to which these dark powers are active in today's world. But the Devil plays all sides, and the writer is also astute in his (her?) exposure of the limitations of 'conspiratorial' thinking, as well as the lies purveyed by the mainstream media, of course.

There's a better way to be taken, and that is the path chosen by Ransom and the Company he gathers around him at St. Anne's-on-the-Hill. We don't know the how and the why behind the facade of surface phenomena. We can guess and surmise but our points of view are always partial and we'll never be able to 'join the dots' in the coherent, comprehensive manner we often crave. Tuning into the Divine Will is what it's all about and then making ourselves receptacles for that Will to act in the world. When it comes to current events, we need to move beyond our obsession with facts - 'What are the facts behind the smokescreen presented to us? What's really going on? - and look for the archetype which is expressing itself through the event. Only then do we start to look the right way through the lens and begin to get a sense of where God is in all this and what He might be asking us to do.

The World We Have Lost 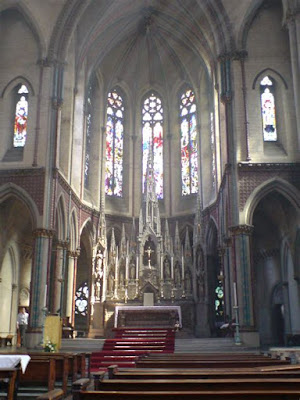 When I think of what we have lost as a society this past year, two buildings spring immediately to mind - a pub and a church - symbols of a world which seems sadly to have vanished. The church is the Holy Name on Oxford Rd, Manchester (above), c.1995 when I used to go every day - a midweek Solemn Mass, Palestrina in the choir loft, candles glowing, incense billowing, kneeling before the Logos with three hundred others as the bells ring out at the Consecration, a feeling of unity and connection - not just with my peers, but with the Communion of Saints and the whole angelic host.

The pub is The Briton's Protection (below), just up the road in town - warm, intimate surroundings, the buzz of conversation, the give and take of banter and debate as ideas (on a good night) fizz back and forth across the table. This is the heart and soul of the City, that Civitas Dei which St. Augustine and Charles Williams championed and of which our earthly cities are a reflection and a stepping stone. 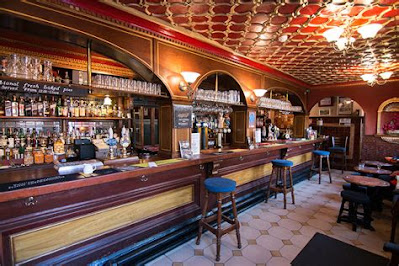 Both church and pub should, on paper, return as before, but the game's not played on paper, it's played on grass, and my sense is that the micro-managerial forces which have gained so much ground in 2020 will be reluctant to let such spontaneous, untrammelled, unmediated collective access to the Divine and the best of the human happen so easily and naturally again. Too unpredictable. Too unruly. Not at all 'safe.'
Ersatz, largely online solutions will be peddled and accepted out of necessity, but these will come to nothing in the long-run. They will founder on the rocks of reality because they have no anchor in human nature and are tethered to an unstable morass of shifting, free-floating illusion. True connection, with both God and man, is hard-wired into us, and the church and pub represent those deep, eternal European archetypes - the sacred and the secular, the Pope and the Emperor, the crown and mitre, crook and flail, etc - the twin pillars on which our civilisation is built.
These two poles cannot be easily or lightly dismissed. They cannot be dismissed at all, in fact, unles this is what the Great Reset is really all about - changing us at a deep and fundamental level so that these primal, archaic symbols can never return. It would be interesting, would it not, if this was the actual, unspoken aim of the restrictions we are currently enduring. Even then, failure would still be its portion, just as it was for the NICE in C.S. Lewis's That Hideous Strength and their anti-natural, anti-Divine machinations.
Truth alone is real and truth alone will win. Falsehood withers in its gaze. Like the Balrog faced down by Gandalf on the Bridge of Khazad-Dum, it cannot pass. No matter how tarnished that mark of truth becomes inside us, it cannot be obliterated or cancelled out. It is the Secret Fire, the Flame Imperishable that Iluvatar, to stay with Tolkien, planted at the core of the universe on the morning of creation. He made men and women partakers in that mystery, and the pub and the church, despite their seeming incongruity and even insignificance, are outgrowths and expressions of that holy gift. They are always present because they are always true and they will come into our lives again without a doubt, resurgent like the phoenix.
The future is unwritten, as Joe Strummer of The Clash once said. Have faith in God, therefore, faith in those around you, faith in yourself, and faith in the indelible stamp of truth inscribed by Iluvatar upon your heart.
Posted by John Fitzgerald at 10:53 PM 5 comments: