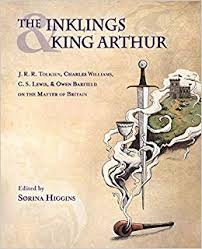 The Inklings and King Arthur: J.R.R. Tolkien, Charles Williams, C.S. Lewis, and Owen Barfield on the Matter of Britain, edited by Sørina Higgins.

'Myth is not entertainment, but rather the crystallisation of experience, and, far from being escapist, fantasy is an intensification of reality.'

This book was released in the UK on January 1st 2018 yet it took me until March 2019 to order a copy. The idea of a collection of essays on the Inklings and their relationship with the Arthurian mythos certainly appealed, but I had doubts regarding the suitability of an academic approach to such imaginatively charged literature: both the original Arthurian corpus and the Inklings' own writing. I was conscious too of what the Humanities have become in many universities today. I feared the dead hand of critical theory and the encroachment of academic jargon and progressive ideology onto books which have engaged and warmed my heart for over forty years. I was worried, in short, that The Inklings and King Arthur project would suffocate the magic.

How wrong can one be? My anxieties were groundless, and it seems extraordinary now that I gave them such credence, given what I know of the editor, Sørina Higgins. Her Charles Williams blog The Oddest Inkling has been a vital stimulus these last seven years in encouraging fresh approaches to Williams' life and work. Higgins' passion and enthusiasm for her subject shines through in everything she writes. She is aware of his faults, but seems less concerned with fending off his critics and more absorbed in exploring the depths of his poems, plays and books, and showing the world just why and how Williams was such a rare and special writer.

Higgins brings the same dedication and intellectual rigour to her editing of this volume. The 19 essays, bookended by her introduction and a conclusion from the poet and priest Malcolm Guite, are serious forays into that fertile terrain where literature meets mythology, then takes wing to inform the surrounding culture. Charles Williams - whose poetry revolves exclusively around Arthurian themes - receives proportionately the most attention, followed by Lewis, then Tolkien, then Barfield. But there is also an emphasis on how the Inklings dovetailed creatively and how the ideas of each member fed into and inspired their companions' 'works in progress'. Brenton D.G. Dickieson illustrates this brilliantly in his "Mixed Metaphors and Hyperlinked Worlds: a Study of Intertextuality in C.S. Lewis' Ransom Cycle." His paper shows how Tolkien's 'Numenor' and Williams' 'Logres' became not only dominant motifs in Lewis' novel That Hideous Strength but also 'hyperlinks' to wider literary and legendary realms:

'When we as readers click on the symbolically rich use of "Logres" in That Hideous Strength, we are drawn into the rich and complex world of Williams' Arthur, which is a subsequent evocation of the historic Arthurian legend in Layamon, Malory, Wace, the Vulgate Cycle, and the rest. In this sense, "Logres" is ... a word that contains entire symbolic universes.' (p.108)

The Inklings and King Arthur seeks throughout to situate Lewis, Tolkien, Williams, and Barfield in the wider context of twentieth century culture and society. "'Lilacs out of the Dead Land': Narnia, The Waste Land, and the World Wars" by Jon Hooper is particularly illuminating in this respect. Hooper carefully picks out the Arthurian currents flowing beneath the narrative stream of the Narnia tales. Here, he says, is Lewis's riposte to T.S. Eliot's The Wasteland and what he calls the 'wasteland mentality', which emerged in the aftermath of the First World War and blamed traditional, high-minded expressions of courage, chivalry and honour for 'duping a generation into sacrificing itself.' (p.280) Hooper claims that Eliot and other Modernists 'asserted that because such values had been appropriated to justify war, the values themselves must be corrupt: a lapse of logic that was fatal in the view of a stern logician like Lewis.' (p.284) In rejecting time-honoured evocations of beauty and nobility - in poetry, visual arts and prose - the Modernists had 'cut people off from the entire western tradition' (p.286) and manufactured a barren, soulless world without meaning or purpose and shorn of glory or divinity.

This is the mentality which Lewis contends against in his Narnia books. 'The Chronicles,' Hooper writes, 'are concerned with healing the disenchantment and despair that the Great War and The Waste Land had left upon the modern mindset, which not even the revived sense of chivalry that arose in the Second World War could lift. To do this, Lewis frequently uses the Arthurian symbol of the blighted land and the theme of the Grail quest.' (p.279) His stories restore and reclaim the ancient verities for the children of the 1950s onwards.

This essay highlights Higgins' central thesis - that the Inklings were in no way driven by nostalgia, wish-fulfilment or escapism, as critics often claim, but on the contrary were deeply involved and engaged in the 'hot button' issues of their time. Their focus, she argues, 'was not on a revival of the past, but on the present's need for redemption: as soldiers, office workers, and creative professionals, the Inklings wrote Arthurian works that contain incisive critiques of their own times and visions of utopian or dystopian futures evolving out of contemporary decisions.' (p.2)

This brings us to the prophetic element in the Inklings' oeuvre. It has been said of Dostoyevsky (by Nicholas Berdyaev, I think) that much that now appears obscure in his novels will become clear in the light of future events. The same, perhaps, applies to the Inklings. The intentional community formed by Taliessin (The King's Poet's Company) in Williams' poems and the little circle which gathers around Ransom in That Hideous Strength are of particular relevance, I feel. With Rod Dreher's The Benedict Option in mind, there are bold and original models here for traditional Christians caught between the Scylla of corrosive liberalism and the Charybdis of declining - collapsing even - religious institutions.

Taliessin's Company, small though it is - a mere 'remnant' - keeps the connection to the Divine that Logres loses. Williams himself attracted such a 'company' in the 1930s and '40s, and this reveals the contemporary relevance of his and his fellow-Inklings' work. In a world in which spiritual values are rapidly being lost, it might still be possible for like-minded people, here and there, to maintain the vision, weather the storm, build anew, and reclaim one day the ancient verities, as Lewis did so memorably in his Narnia stories. Arthur, after all, is a once and future king, as Guite underlines in his conclusion:

' ... Lewis imagined a succession of "Pendragons" of whom Ransom is the latest, who in some sense keep the vision of Logres alive. Whichever way one might choose to imagine a return of Arthur, the contents of this book make it clear that, for the Inklings at least, he had never really gone away ... In the story of Arthur, in both his rise and fall, in both the forming and betrayal of the Round Table, the Inklings found material not only for escape and consolation, but more profoundly, for recovery: a recovery of vision that they believed to be vital for their own generation and that has proved to be prophetically relevant for ours.' (p.504)

Posted by John Fitzgerald at 3:25 PM No comments: