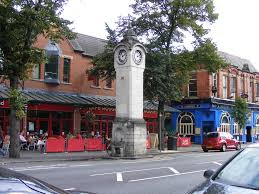 It's January 2031, and this is my first visit to my home suburb of Didsbury, South Manchester, since the great calamities of 2019-23. The whole morning (today's a Saturday) has been a rollercoaster ride. The good news is that I went from blank despair to hope and joy in the space of fifteen minutes. So if it can happen to me it can happen to you and to us all. And that's a message, I think, that this stifling, technocratic age needs to hear more than anything else.

It has to be said, however, that I seemed the only person in Didsbury Village to find things stifling. Everyone else appeared perfectly content. I walked the length of the Village, from the Clock Tower to the Shell Station and back again, and I thought that it must be me, that I must be mad or traumatised or not yet recovered from some deep childhood wound that rendered me unadaptable to a world which everyone else clearly found so easy and palatable.

On the surface, everything looks the same as it always did. Cars and buses clog up Wilmslow Road. The pavements are bustling. The shops and cafés are ticking over nicely. But look a bit closer and you'll notice the differences. There are no beggars outside the Co-op any more. No wheelchairs either. Not as many prams or pushchairs as before. And the pubs, those time-honoured landmarks, have gone. The Station, The Dog and Partridge, The Nelson, The Fletcher Moss, The Royal Oak and The Crown. Fixtures and fittings of my youth. Places of banter, connection and fun. Vanished now. Gentrified out of existence by pointlessly unaffordable apartments.

Look closer still and it gets worse. The coffees and croissants in Costa are dealt out by robots. Many of the cars are driverless. Every single person, apart from me, is wearing a headset. But what upsets me most is the sight of these infernal chip things on everyone's right hand palm. It's a wonderful invention, they say. You can open car doors with it, buy and sell things with it, use it for ID, and even as a bus pass or library ticket. The global administration, set up after the disasters, is doing everything it can to promote it. They're not as expensive as they used to be, and just by having one you can boost your Social Credit Score (SCS) by 20% and get yourself cheap train tickets, cinema discounts and all manner of perks. It probably goes some way to explain why my SCS is so bad (-80 at the last count) and why I'm wearing clothes bought in 2018!

In some ways, I suppose, the U.K. branch of the global government has done a decent job. Everything's so spick and span and neat and tidy. You'd never think such terrible things happened so recently. I have to admit as well that people seem happier than they did before the calamities, when everyone habitually looked so miserable and put upon. But it's a brittle kind of happiness, I feel. There's something fixed about the smiles; something glazed and glassy in the eyes. And as I stood outside the former Royal Oak, weighing them all up, a line from a D.H. Lawrence poem sprang to mind - 'monkeys with bland grins on their faces' - and I grinned myself at the farce playing out before me. If Lawrence thought that about his compatriots a hundred years ago, what on earth would he think now?

It would be good, I reflected, if one could still go to church and kneel in silence and pray for inspiration, but both Christianity and Islam had been declared pathogens and the punishment for attending a secret mosque (I hadn't yet heard of a secret church) was instant disappearance.

Then I noticed a man in a blue suit looking at me from the other side of Wilmslow Road. He was standing by the little door between the HSBC and the Co-op. He had dark hair and a beard and his expression was clear and focused. There was no bland grin, no headset, no chip. So when he beckoned me over I had no hesitation in crossing the road. He opened the door and walked down a flight of steps, looking over his shoulder once or twice to make sure I was following. As I descended, I remembered another poet, Charles Baudelaire, and his Le Joueur Généreux, where the poet is likewise ushered through a door and down a set of stairs to a soirée hosted by the Devil no less, at which Baudelaire recklessly gambles away his soul.

To be honest, I'd probably have settled for such a scenario, given the soulless nature of what daily life has become, but it was no louche dinner party which greeted me at the bottom but a Catholic Mass with about thirty people present, everyone kneeling on the wooden floor. My companion knelt down at the back and I did the same. The were no lights, just a blaze of candles on the altar, and around that altar stood three figures dressed in white and gold: an old man with a long white beard in the middle, a young woman with dark hair and a round face to his right, and a tall African-looking man to his left. A boy in a red and white alb stood in front of them, swinging a thurifer.

The old priest bent low over the altar, while the other two pressed close, their hands outstretched in blessing. Behind and around them congregants started to gather and watch - people of all ages - from children, to the middle-aged, to folk in their eighties and nineties. I looked at their faces and felt a deep reassurance in my soul that all was not lost. Far from it. Their expressions were marked with suffering and care, yet their eyes shone with vitality, defiance and a faith and hope in God that had clearly waxed rather than waned under the current tribulations. The minds of these men, women and children had not and never would become colonised spaces. That, without doubt, was something to celebrate. Then the priest said the words of consecration:

"For when the hour had come for him to be glorified by you, Father most holy, having loved his own who were in the world, he loved them to the end. And while they were at supper, he took bread, blessed and broke it and gave it to his disciples, saying, 'Take this, all of you, and eat of it, for this is my Body, which will be given up for you.'"

He lifted up the Host and everyone looked at it in silence. It was then that I spotted a mural on the wall behind the altar. The colours were faded and the paintwork peeling, but like my companions' faces it blazed with a fierce inner light. It was an icon of the Transfiguration - Christ shining forth in white, with Moses to his left and Elijah to his right. The priest continued:

"In a similar way, taking the chalice filled with the fruit of the vine, he gave thanks and gave the chalice to his disciples, saying, 'Take this, all of you, and drink from it, for this is the chalice of my blood, the blood of the new and eternal covenant, which will be poured out for you and for many for the forgiveness of sins. Do this in memory of me."

The priest lifted the chalice and everyone looked up again. And it struck me, as I gazed at the golden chalice, that the Eucharist is not just an act of witness which takes place in the present. Nor is it simply a commemoration of an event which occurred in the past. It is both of these and more. It is, in its most fundamental aspect, what the Greek theologian, John Zizioulas, calls a 'memory of the future', a harbinger and forerunner of a Christ-centred age of healing, reconciliation, integrity and wholeness to come.

I saw and felt with absolute clarity that today's 'here and now' is not the be-all and end-all and that one day it will dissolve and cede place to a wider, deeper, more essential reality - what Nicholas Berdyaev called 'the Eighth Day' - the transfigured world, of which the Transfiguration of Christ depicted on the wall is itself a forerunner and harbinger. The Eucharist is the sacred space where this transformed reality - this future beyond the future - is taking shape. It is a site of resistance - the only place in these dark times where the annihilation of the human subject is contested, denied and sent packing back to Hell.

"Offer one another the sign of peace," says the African priest, and I'm more than happy to turn to my blue-suited guide and shake his hand, clasp his shoulders and kiss him on the cheek, everything I would have run a mile from and damned as 'touchy feely' in the days when the Mass was legal. But none of that matters now. A new level of fraternity is being born. The first shoots of the transfigured world are springing up in this chapel. The foundations of the Heavenly City are being laid as I write. This is the Eighth Day. Here, now, and always. 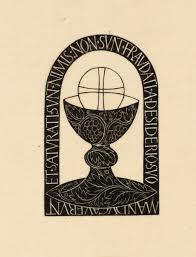