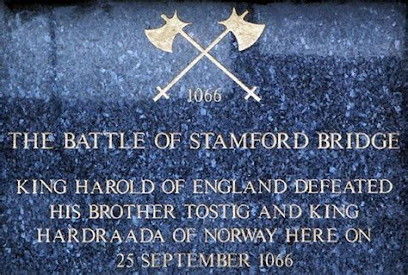 Today, September 25th, is the anniversary of one of the greatest military triumphs of Anglo-Saxon England, the Battle of Stamford Bridge in 1066. King Harold II and his army comprehensively dismantled a colossal Viking force, captained by Harald Hardraada of Norway and Harold's renegade brother, Tostig. The English victory was as emphatic as they come and brought to a definitive end neatly three hundred years of incursions and invasions from Scandinavia.

C.S. Lewis and Our Current Moment

Last week I had to complete some unconscious bias training for work purposes. It seemed a relatively benign experience on the whole. It was an online course and only took half an hour. Certainly not a 'struggle session' or anything like that.

At the very end, however, in the recap section, a phrase leapt out at me: 'Don't trust your intuition. Rely on objective data instead.' And a million alarm bells rang out in my mind. I was reminded straightaway of the Objective Room in C.S. Leiws's That Hideous Strength, where Mark Studdock is taken by the National Institute of Coordinated Experiments (NICE) to be re-educated. The aim is to rub out the individual's innate sense of right and wrong and make him into a tabula rasa so that supposedly objective, but in reality evil, assumptions can be implanted in him instead:

'To sit in the room, Mark understood, was the first step towards what Dr. Frost called objectivity - the process whereby all specifically human attributes were killed in a man... Higher degrees in the asceticism of anti-Nature would doubtless follow: the eating of abominable food, the dabbling in dirt and blood, the ritual performances of calculated obscenities.'

Mark observes a number of pictures in the room:

'At first, most of them seemed rather ordinary, though Mark was a little surprised at the predominance of scriptural themes. It was only in the second or third glance that one discovered certain unaccountable details - something odd about the positions of the figures' feet or the arrangement of their fingers or the grouping. And who was the person standing between the Christ and the Lazarus? And why were there so many beetles under the table in the Last Supper? What was the curious trick of lighting that made every picture look like something seen in delirium?'

This theme of the corruption of art led me to reflect on how something like the above might be achieved by the powers of evil in the world today but on a much wider, societal scale. The idea came to me that perhaps what Satan really wants out of this whole Coronavirus saga is a huge symbolic triumph. He knows that the symbolic level is the most important of all. It cuts far deeper than the political and social levels. So what if he was able to engineer a complete rewriting of human spiritual and cultural history, symbolised perhaps by a reworking of Michelangelo's Last Judgment, with some characters erased so that everyone on the canvas can be socially distanced and with all of them wearing masks?

It sounds far-fetched, I know, but what more potent, long-lasting and deeply Orwellian way could there be of embedding and encoding the 'new normal' into our minds?

Another way in which Lewis has been prescient this year is with regards to this never-ending wave of riots and protests, particularly in America but in Britain and Europe as well to an extent. What especially concerns me is how these protests have often seemed to involve the desecration of churches and statues of Our Lord and the saints. I'm thinking especially of a statue of Our Lady which was recently decapitated in Canada. There have been plenty more statues which have met the same fate during the last few weeks. No-one has been hurt, defenders of this lunacy will say, but that's not the point. The symbolism, again, is everything, and this level of hatred and animosity is clearly a prelude to people getting hurt anyway.

On one level the whole thing seems completely bizarre and pointless. What responsibility does Christianity have for the death of George Floyd? None. But if we look at things from a demonic point of view it might be exactly this 'slippage' into attacks on Christian symbols that is the whole aim of the exercise. This is the direction, quite possibly - almost definitely,  I'm inclined to say - in which the situation is being guided.

'A great crowd of people were standing all round the Stone Table and though the moon was shining many of them carried torches which burned with evil-looking red flames and black smoke... Everyone was at him (Aslan) now. Those who had been afraid to come near him even after he was bound began to find their courage, and for a few minutes Susan and Lucy could not even see him - so thickly was he surrounded by the whole crowd of creatures kicking him, hitting him, spitting on him, jeering at him.'

We begin to see now the pincer-movement which Satan has so far successfully deployed in 2020. Rudlof Steiner saw the exact nature of how this works, with what he called a Luciferic point of attack on one side - lustful, violent, furious - and an Ahrimanic assault on the other - cold, bureaucratic, soul-destroying. Ahriman is more powerful than Lucifer. The latter is the former's 'useful idiot' and serves, often unknowingly, to advance Ahriman's ends.

So there we are. This is exactly the current situation, and it seems to me that Lewis flagged both aspects up in his fiction. It is important for us to be aware of this. Our counter-attack (and there must and will be one) will have to take place first of all on the spiritual level and it needs to be based on, dare I say it, this objective assessment of where we are and who is pulling the strings and why.

Posted by John Fitzgerald at 10:31 PM No comments: