... And what you thought you came for
Is only a shell, a husk of meaning
From which the purpose breaks only when it is fulfilled ...

The King - head bowed, eyes closing - came to Little Gidding at nightfall. His horse plodded loyally on; he knew the way well - off the rough road and behind the pigsty to the dull façade and the tombstone. Charles glanced up, and through a squall of May rain caught the gladdening gleam of candles and lamps. 'It is good to be back,' he thought. John Ferrar, the master of the place, stood on the threshold and greeted the King, then led his horse to the stables, as Charles looked about him - for the last time, he was sure - at the chapel and house and the hedges surrounding the demesne, white now in spring with voluptuary sweetness.

They shared a meal of bread, cheese and wine - the King, John Ferrar, his sister Susanna, her husband and their many children. Knowing now that his dream of a ship from King's Lynn was futile and that soon he would have to surrender, Charles abandoned his schemes and told stories instead of previous visits here, long ago before impious hands rose up against him. He had high hopes for this place then, and for his Kingdom, that both might reflect and shine forth the divine light of Heaven. Nicholas Ferrar, John's brother and the founder of the community, was alive in those days, and he was a man so soaked in prayer and so nakedly holy that it seemed in his presence that all things might be possible. 'I should have been more like your brother,' the King told his hosts. Nicholas was a prodigy of the age, a businessman and parliamentarian on the highway to success in this new mercantile world. And he had thrown it away to set up home here at this remote site - like the monks of Skellig Michael of old - and establish this House of God. 'Your brother,' said the King, 'knew what was true and what false. He saw through illusion and pretence and stored up treasure in Heaven, whereas I, too often, have failed to discriminate between the two and have fallen between stools and so lost my treasure.'

There was time aplenty for the King to dwell on these things in the chapel that night. The community sang the Psalter, ancient songs of praise and lamentation from another king, David, who had likewise been laid low by fate, the obduracy of his enemies, and his own moral and spiritual failings:

Attend unto my cry; for I am brought very low; deliver me from my persecutors; for they are stronger than I. Bring my soul out of prison, that I may praise thy name.

Charles bowed his head, buried his face in his hands, and wept. How had it come to this? What could he have done differently? Why had he been chosen, fragile vessel that he was, to take a stand for hierarchy and the things of the spirit when from one end of Europe to the other the crass commercial tide was drowning everything singular, precious and rare? Had he vowed to God, before his birth, that he would save his realm from the surging forces of Mammon? If so, then he had failed in his commission, dazzled and distracted by conflicting advice and deceived by vanity and hubris. What would God say to him now, having let spill both his own life and that of his country? What was the price of such high-stakes failure?

After four hours the chant was completed and the community retired to bed. But the King stayed where he was, kneeling on the ground, a halo of candlelight circling his weary head. As was the practice of Nicholas Ferrar, the King, he decided, would remain in the chapel all night and spend the hours until dawn in prayer and contemplation.

The tears flowed on - sobs of bitterness, rage, impotence and loss. They dried up, and a barren emptiness pressed down upon the King. His spirit passed aimlessly through vast, untenanted, derelict cathedrals of the mind. Then out into the desert, a parched land of drought and jagged rocks. Shattered glass. Rusty knives. A heap of broken images. The whole great world ground down like dust to nought.

Then out of the debris one image, one memory, welled up in his mind. A travelling scholar - a Welshman - whom he had met years ago while journeying through France and Spain, had told him how the Greeks of ancient times believed that at the heart of every labyrinth - physical, mental or spiritual - lay a monster who had to be faced down and slain before the return to the light of the sun could begin.

The memory itself was monstrous to the King - the realisation that after all this time and all this waste and pain he had not even arrived at the beginning. For the first time in his life he felt, saw, and heard the monster coiled twitching at the heart of his own labyrinth. He flung himself forward onto the cold stone floor and stretched out his fingers as if grasping for a handhold on a high mountain ledge.

But there was no hold. And no bottom to the King's fall. The veil between the past and the present was torn to pieces and he lived again in every awful detail the vacuity of his life and saw the truth of it as never before. It reflected badly on him, this rending pain of re-enactment of all he had been and done, the shame of hidden motives now revealed and the awareness of things ill done which once he took for exercise of virtue. And still his fall continued - sheer, vertiginous, no-man fathomed.

Charles knew he was no Jacob. He could not fight this thing alone. It was too strong. It would overmaster him now as it had always done, only this time he would be conscious of it and that would make the agony worse. So he called on Christ to help. 'Save me, Lord,' he cried out, and the stones rang with the sound of his plea. He had prayed to God on countless occasions before and in many different contexts, but this time was different. This time was real. It was the first time he had called on God in fear and desperation; the first time he had trusted in the Divine rather than himself; the first time he had been so pummelled and stripped and pulled into pieces. So he called on the Most High like a child or a peasant or that humble, though bold, fisherman who realised in panic and shock that walking on water was beyond his human frame. 'Save me Lord, for I am drowning.'

The King did not hope for an answer. He was long past hope. He had spent his whole life hoping for solutions and fixes of one kind or another. Always hoping for the wrong thing. And then, he knew not why nor how, he was somehow falling up, not down, and there was a light dawning in his mind and a music stirring his heart. He was swimming up through deep blue water from the bottom of the sea. Then the waters broke and gold and silver flooded his brain. 'Do not be afraid,' said a voice. 'It is I.' The King stood up and looked around but there was no-one there. And the chapel was transformed. It shone in innocency and joy. The stones and candles sang out in hosannas. Though it was blackest night outside, the altar sparkled with new-minted freshness, as if blessed by the dawn sun after a night of pelting rain.

Charles lit a candle and stood before the statue of St. John the Evangelist. He closed his eyes and prayed. But not for himself. He had no need, for strong hands had lifted him out of the labyrinth of self. He prayed instead for the place - for Little Gidding - the chapel, community and house - that the Holy Spirit might descend upon it as in the days of Nicholas Ferrar and light up the hearts and minds of all who came this way. He prayed for everyone connected to it these last twenty years - those in love with the life here and those repelled by it - Puritans, Royalists, poets, priests and politicians. He looked into the future, shuddered, and begged that Little Gidding might one day be a shrine - a place where motives are purified in the furnace of prayer and grace continually bestowed - a place where prayer will always be valid. He asked that pilgrims might find refuge here in dark times to come of materialism and decline, and that poets find words to convey its essence to a world almost wholly denuded of sacred sites and numinous terrain:

A legacy of images, symbols and ideas,
Flowers of restoration and renewal,
Seeds planted in the dark night of disenchantment and the exile of the gods, 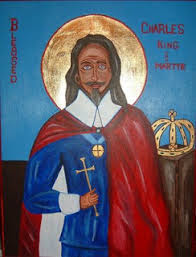 
Posted by John Fitzgerald at 11:11 AM No comments: